This artwork takes three forms:
As a vinyl, as a bespoke record player/gramophone and also as a full length album upload on YouTube.
This concept was not made for a specific musician in mind, it rather came about via general cross-pollination between my musician friends and myself, a visual artist.
The visual concept plays with ‘wax’ on many levels, and is supposed to capture the turn of the century hi-fi/lo-fi zeitgeist - the blending of the analogue and digital.
The humanoid accoutrements that make up the gramophone, the hand as the needle and the ear as a speaker, aestheticise the old tech. The means become an end.
The pointing hand needle is the arbiter of taste: the DJ’s finger on a touchpad or keyboard, stressing a singular sensibility, the will and whim of the consumer. Beneath the obvious subversion, the ear represents the importance of listening rather than speaking in a world of already deafening output.
The hard-copy album format is out, since most people find their music on YouTube, primarily a video sharing website. So I decided to animate the album cover I designed so the candle spins and melts to fit the duration of a given album so that it could exist in the same way most albums do now, but with a twist that no one else has tried before (see third image).
The image of the record player playing the album that it is designed for then being broadcast on the web, captures the self-reflexive quality of 90s/early 2000s revivalism.
The piece meanders across uncanny valley but ends up in dramatic metaphysical space, witnessing the digital distillation of space and time, the variable melting into the constant.
Below is a visualisation of how the products could be marketed on a website. 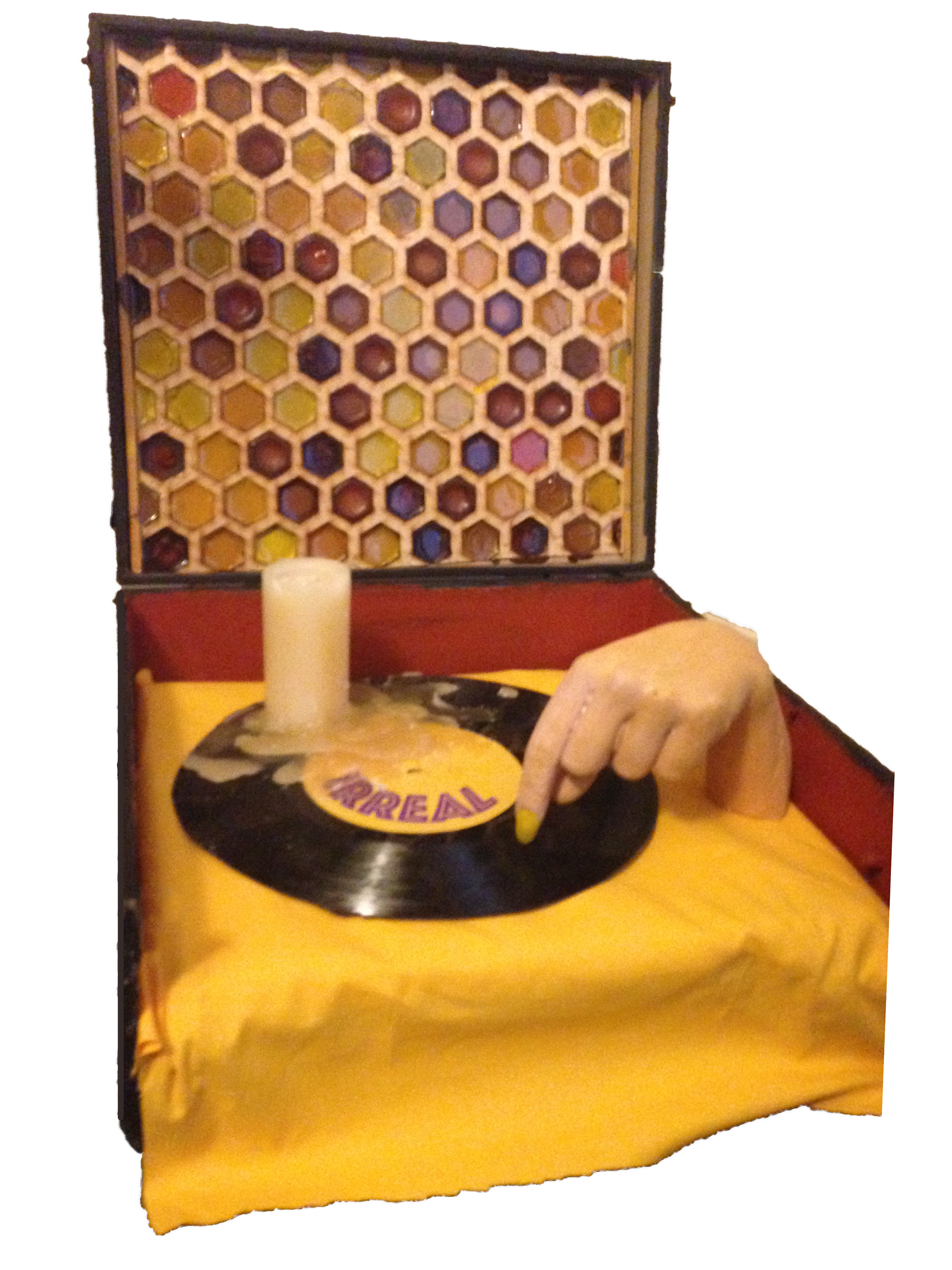 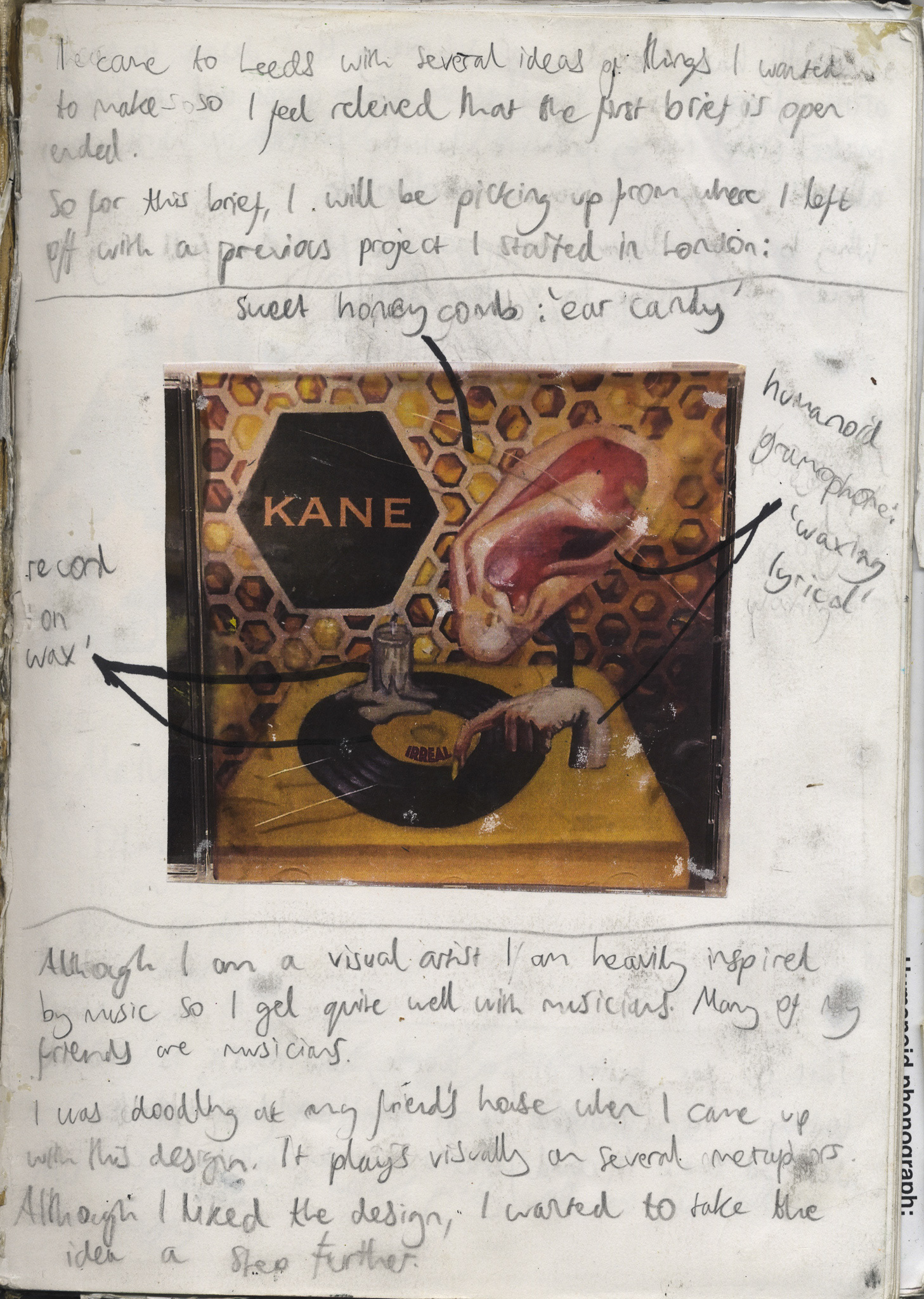 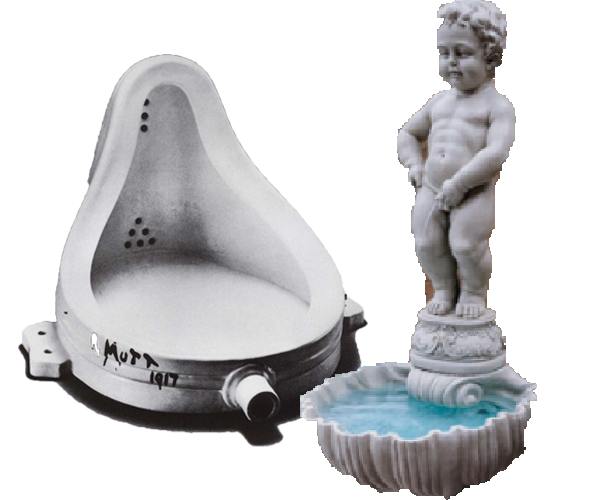 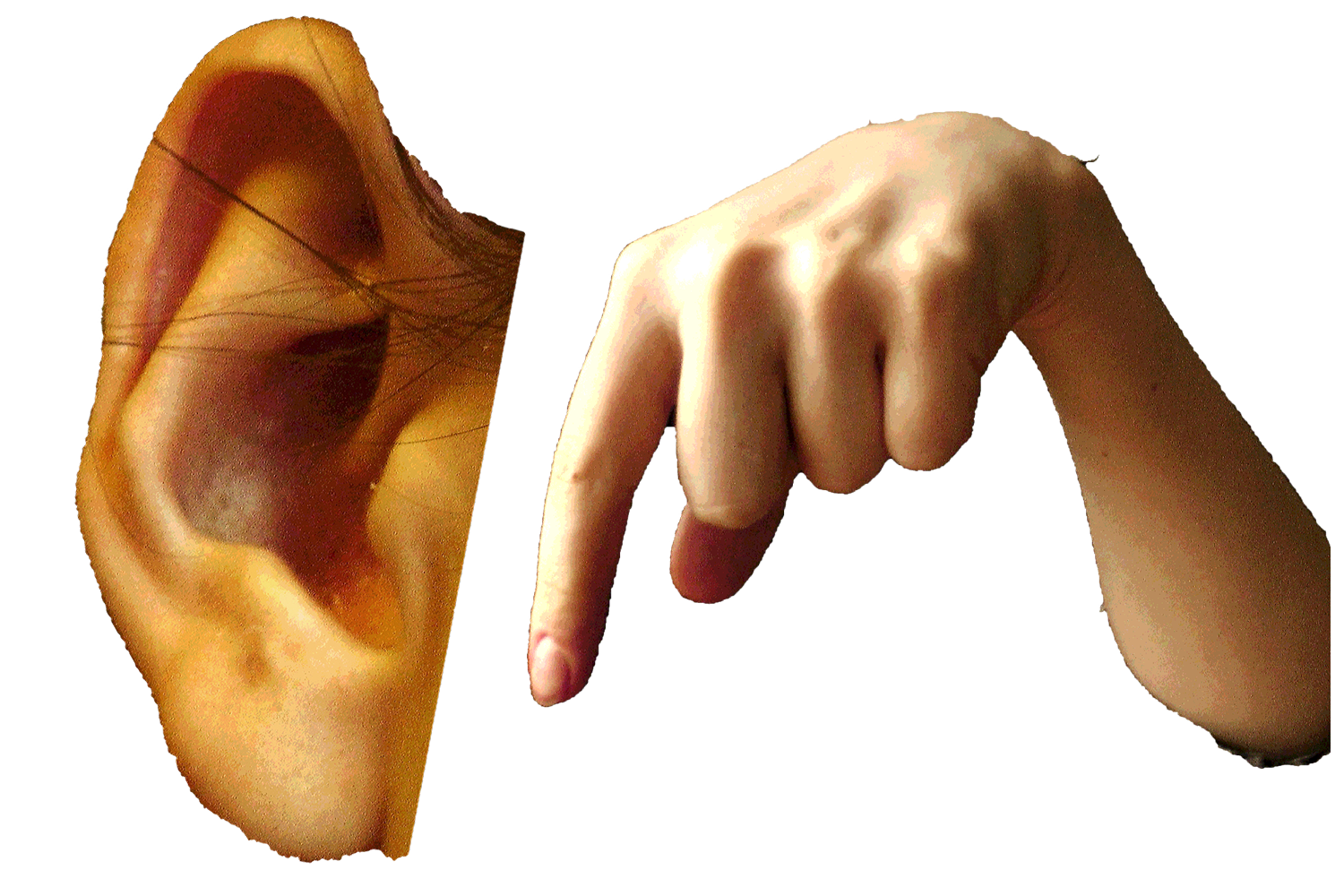 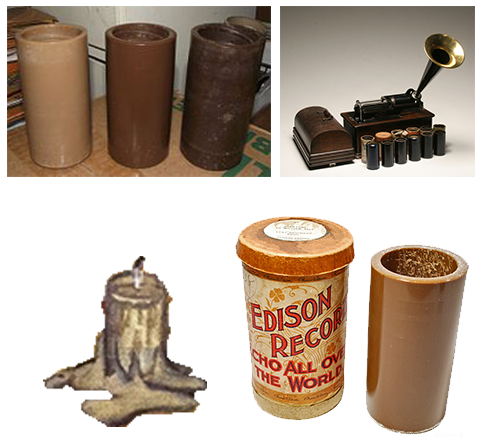 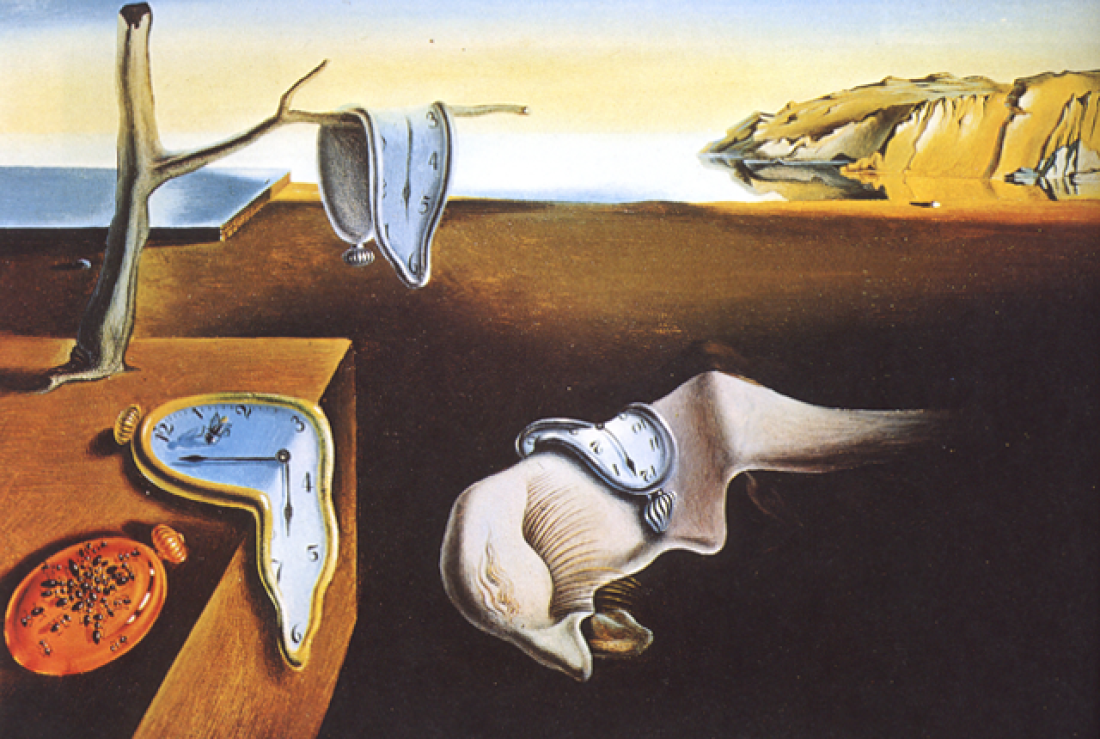 The work originally began a fixation on the mental image of a candle melting on a record. I figured that the logical artistic conclusion of this image was to turn it some kind of album art.
I drew this initial image out, and then extended it into a full gramophone set up, adding an ear as the speaker and a pointing hand as the needle. So the record player needle and the speaker have been supplanted by the body parts that relate to those processes.
This is similar to Baroness Elsa's Fountain urinal piece (Duchamp was a thief) where the function of the object has been reversed/subverted. The hydraulics of a fountain work opposite to that of a urinal. Fountains and urinals are both public objects, but exist in very different contexts. To comic effect, the sleazy character of the public urinal is played off against the traditional, high-art image of cherub sculptures peeing into fountain.
Once I had the humanoid gramophone concept drawn out in colour, I realised that many metaphors of wax can be read intp it.
The sweet honeycomb background and ear gramophone could be a stand in for the idea of 'ear candy'.
The phrase 'record on wax' refers to the process of wax cylinders were being used as recording mediums in the early development of gramophones. These wax cylinders bear resemblance to candles.
The motif of the melting wax candle, suggests material disintegration; a melting away of legacy recording formats (vinyl, CDs, tape recorders) into obsolesce. Similar to how some critics postulate that the melting clocks in the Persistence of Memory served as a visual metaphor how the theory of relativity shifted the existing social paradigm around time.

“A hundred years ago, people figured out how to take art and put it on a physical thing. They figured out how a record light or music on a wax cylinder, and then we built huge industries on top of getting that physical media to consumers.
With the web, to get your art from creator to fan is an entirely free process, and essentially, whats going to happen is that we’re going to go back in time to when the physical thing didn’t exist."
- Jack Conte, CEO of Patreon 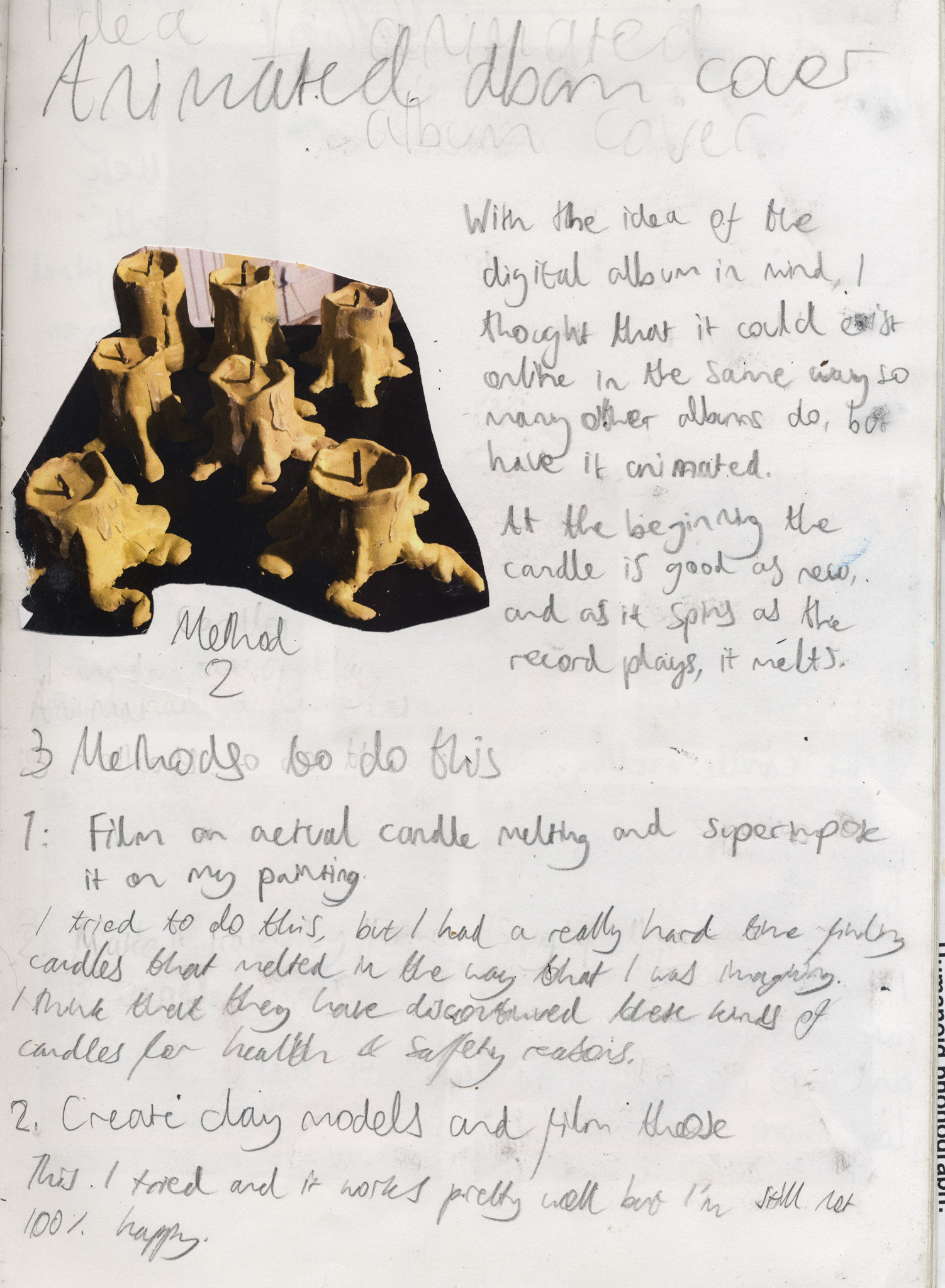 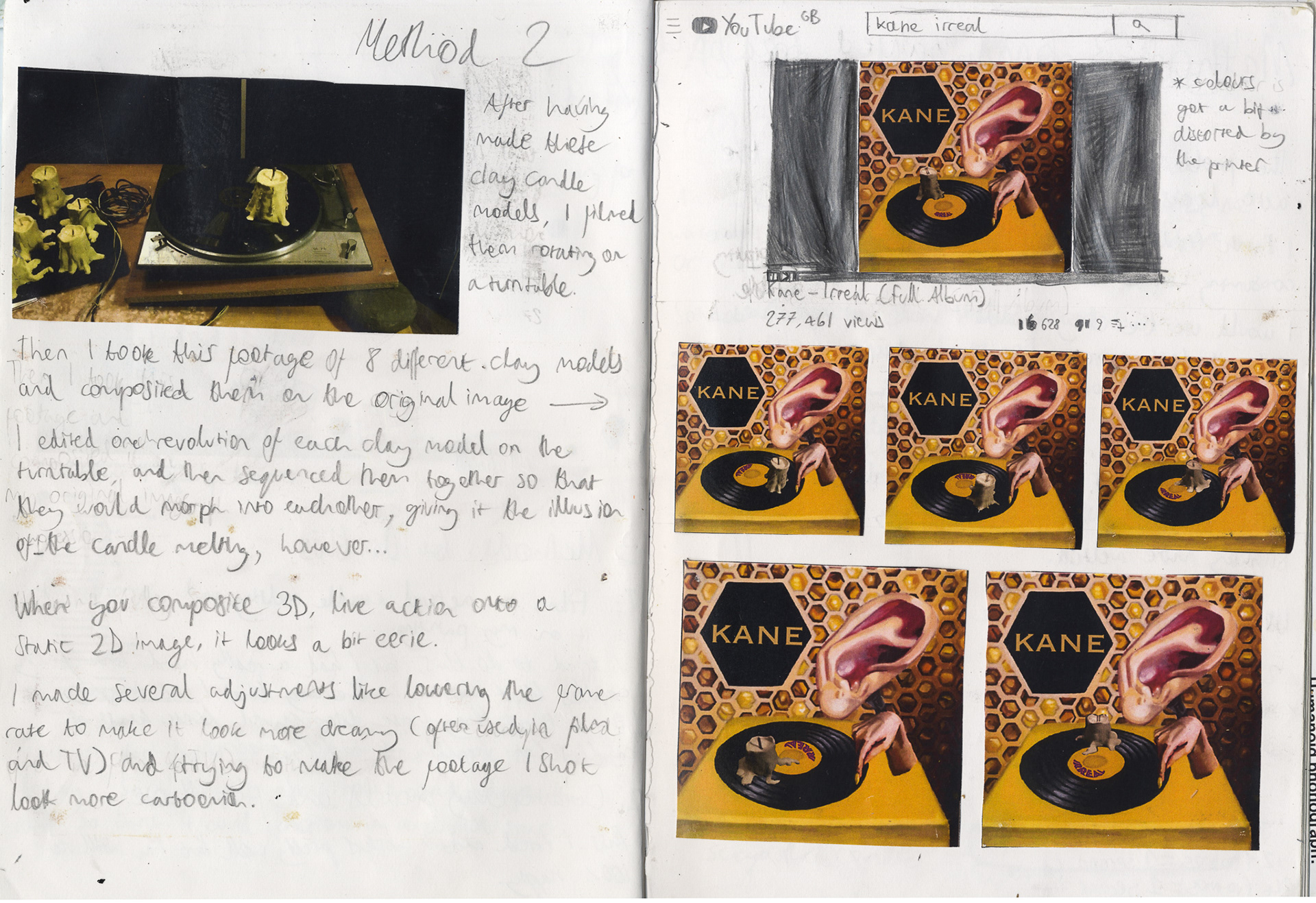 For the animated album cover, I hand-sculpted seven different clay candles, each at a different stage of melting.
I then filmed them spinning on top of a turntable, set up to be the same angle as the one I drew in the piece. I then rotoscoped this footage in After Effects and composited it on top of the static image to create the animation. 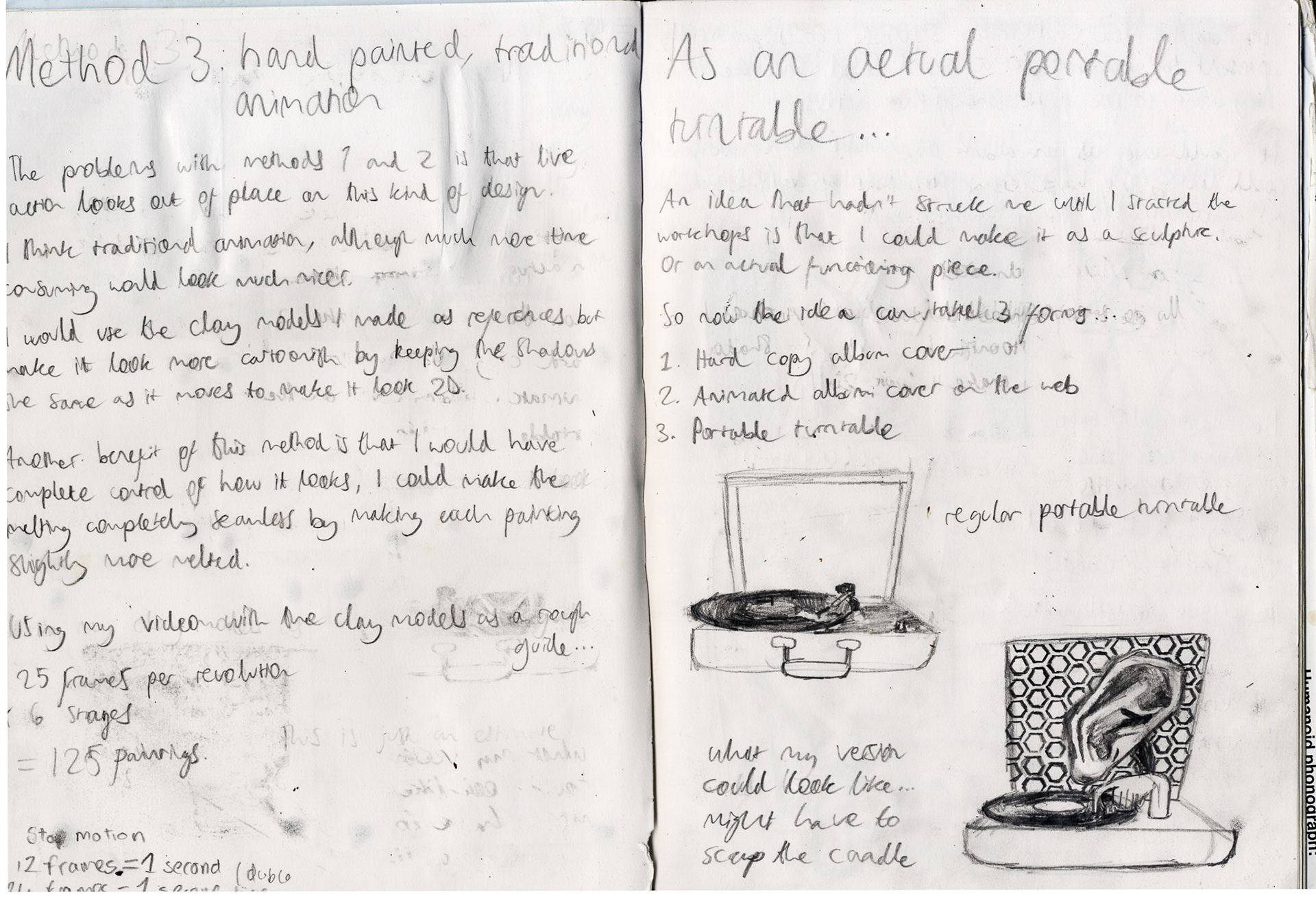 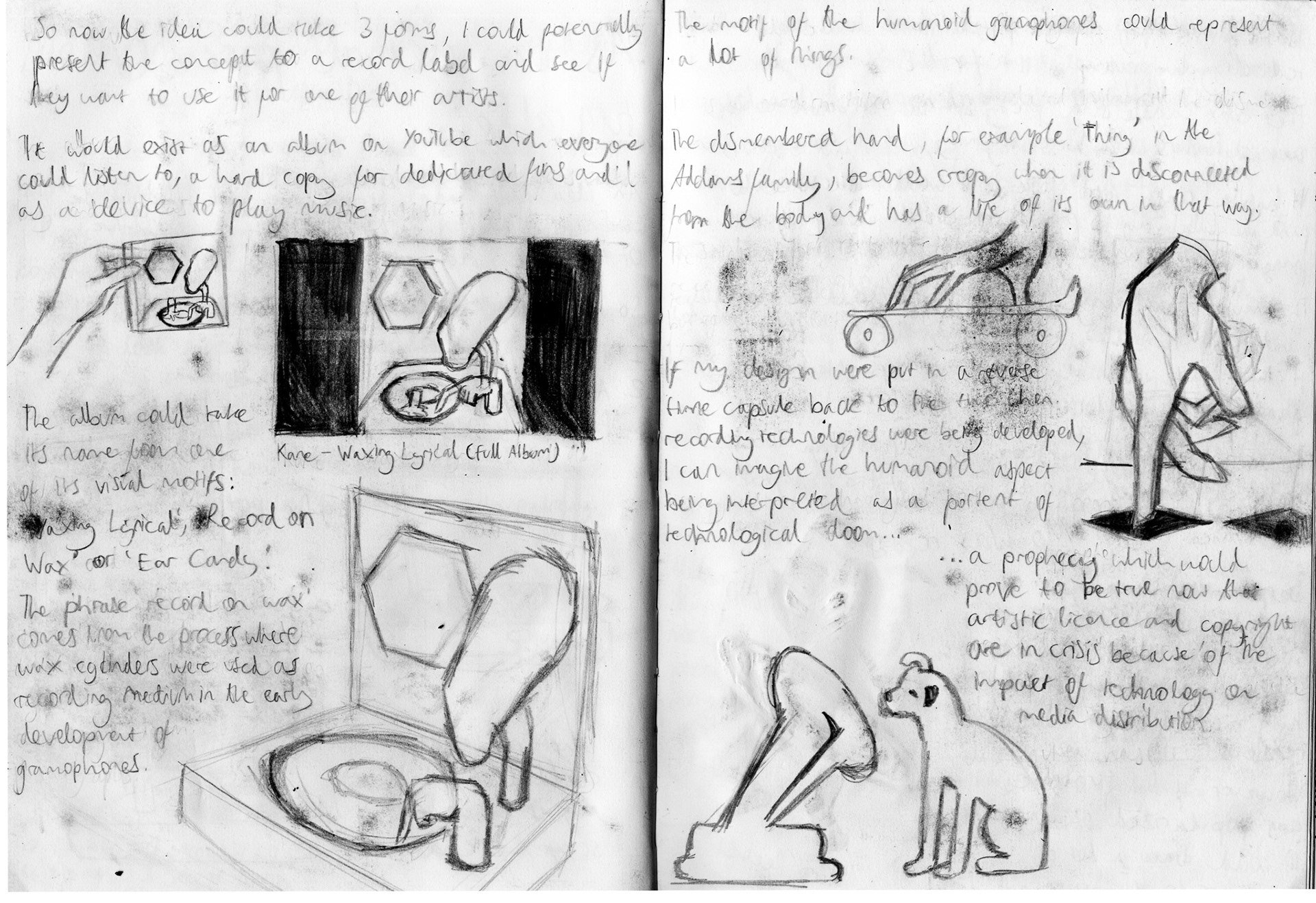 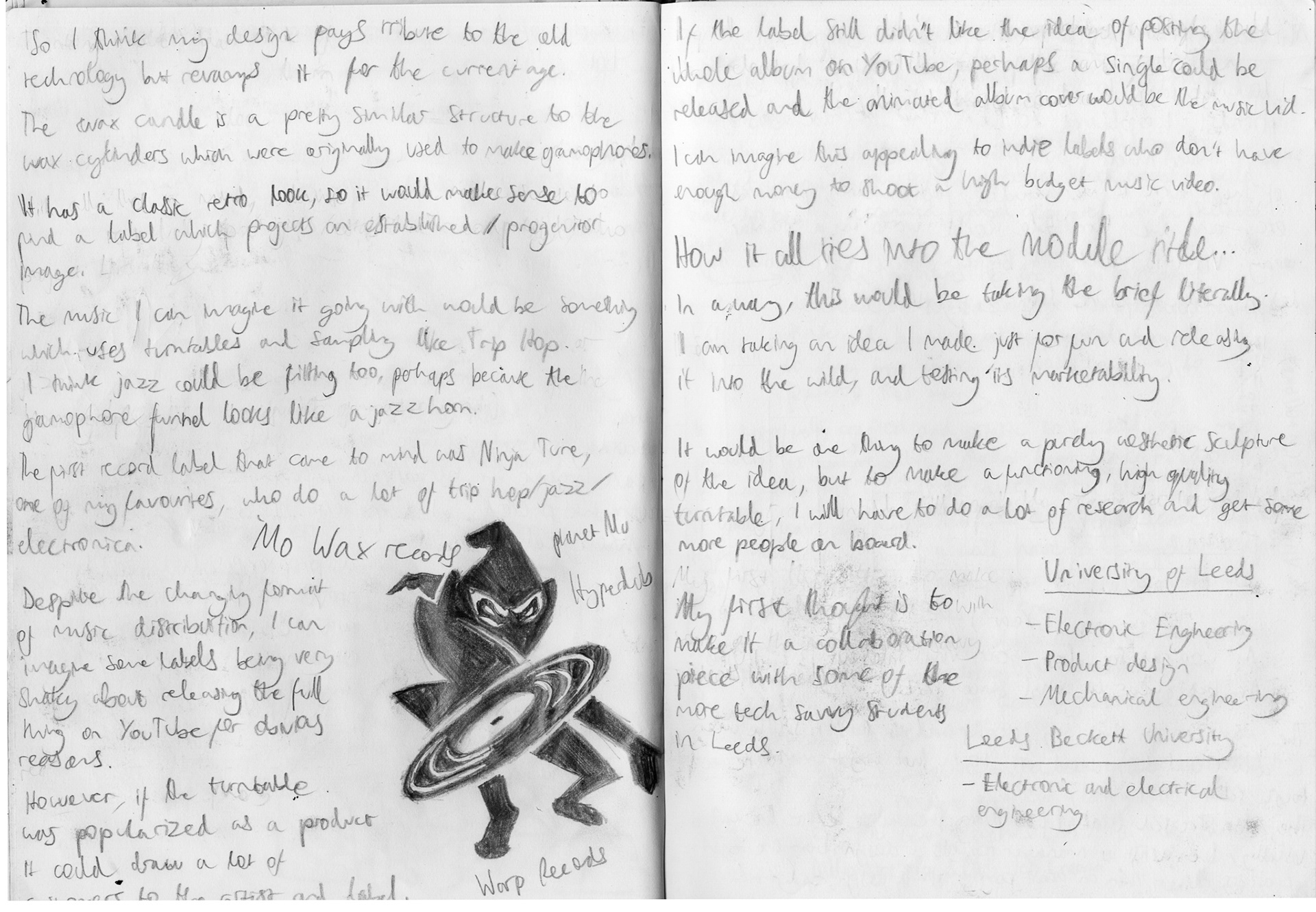 Once I had the idea of realising the 2D concept as a turntable sculpture, I filled up 6 pages pontificating what this would represent.
For why would I make it as a sculpture when I have already appeared to resign myself to the trend of digital dematerialisation?
I wrote:
"The motif of the humanoid gramophones could represent a lot of things.
The dismembered hand, for example. 'Thing' in the Addams family, becomes creepy when it is disconnected from the body and has a life of its own in that way.
If my design were put in a reverse time capsule back to the time when recording technologies were being developed, I can imagine the humanoid aspect being interpreted as a portent of technological doom...
a prophecy which would prove to be true now that artistic licence and copyright are in crisis because of the impact of technology on media distribution." 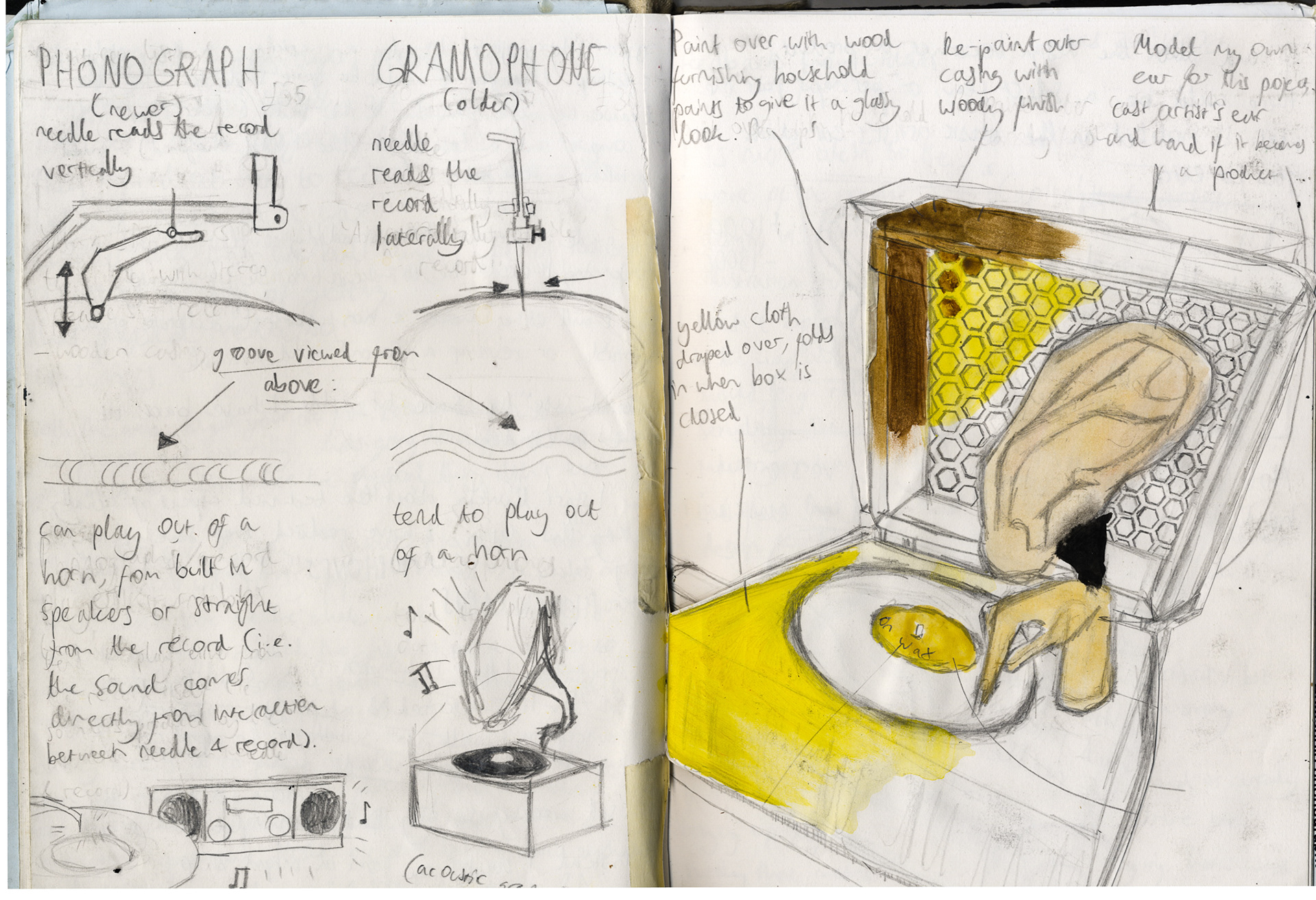 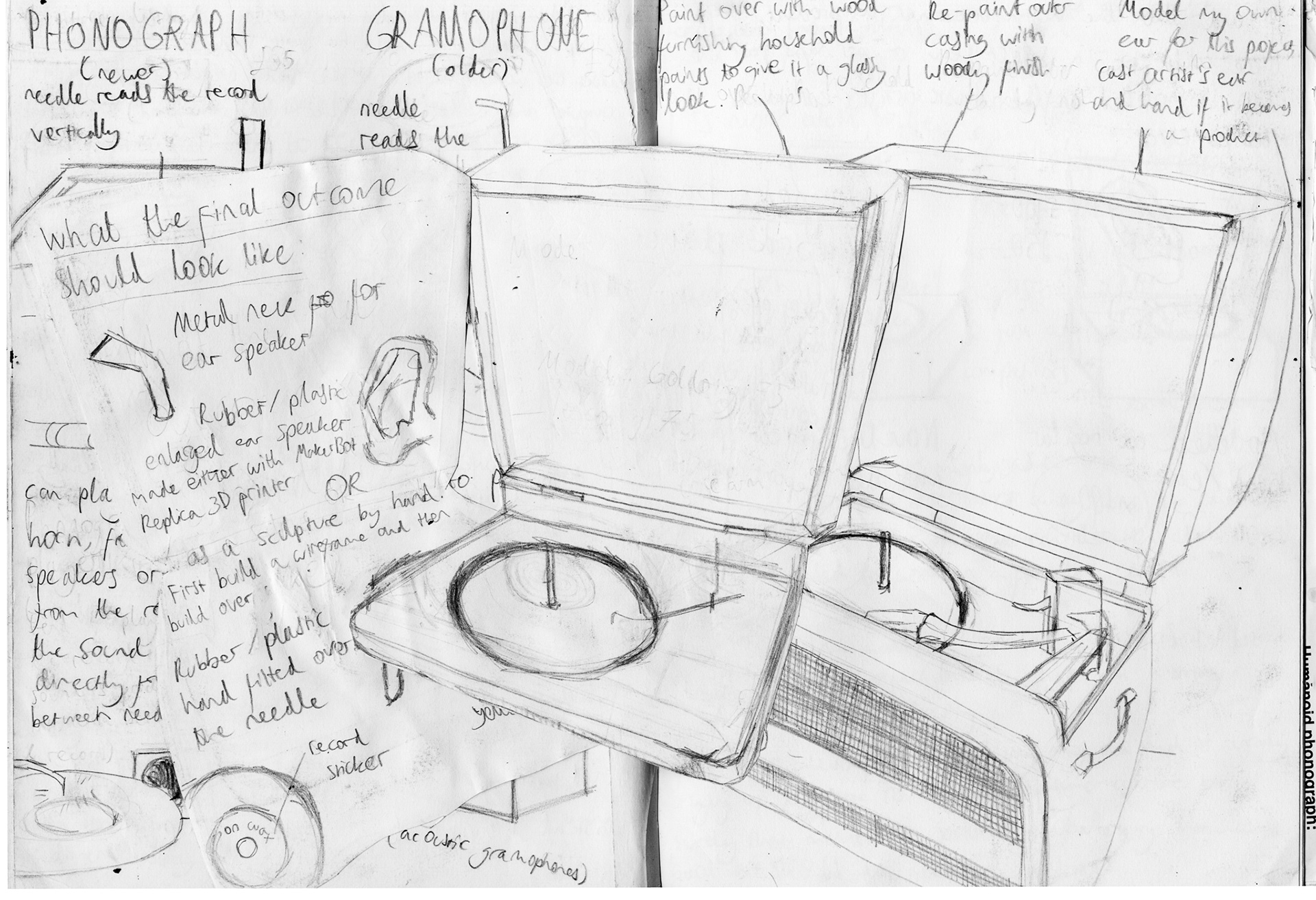 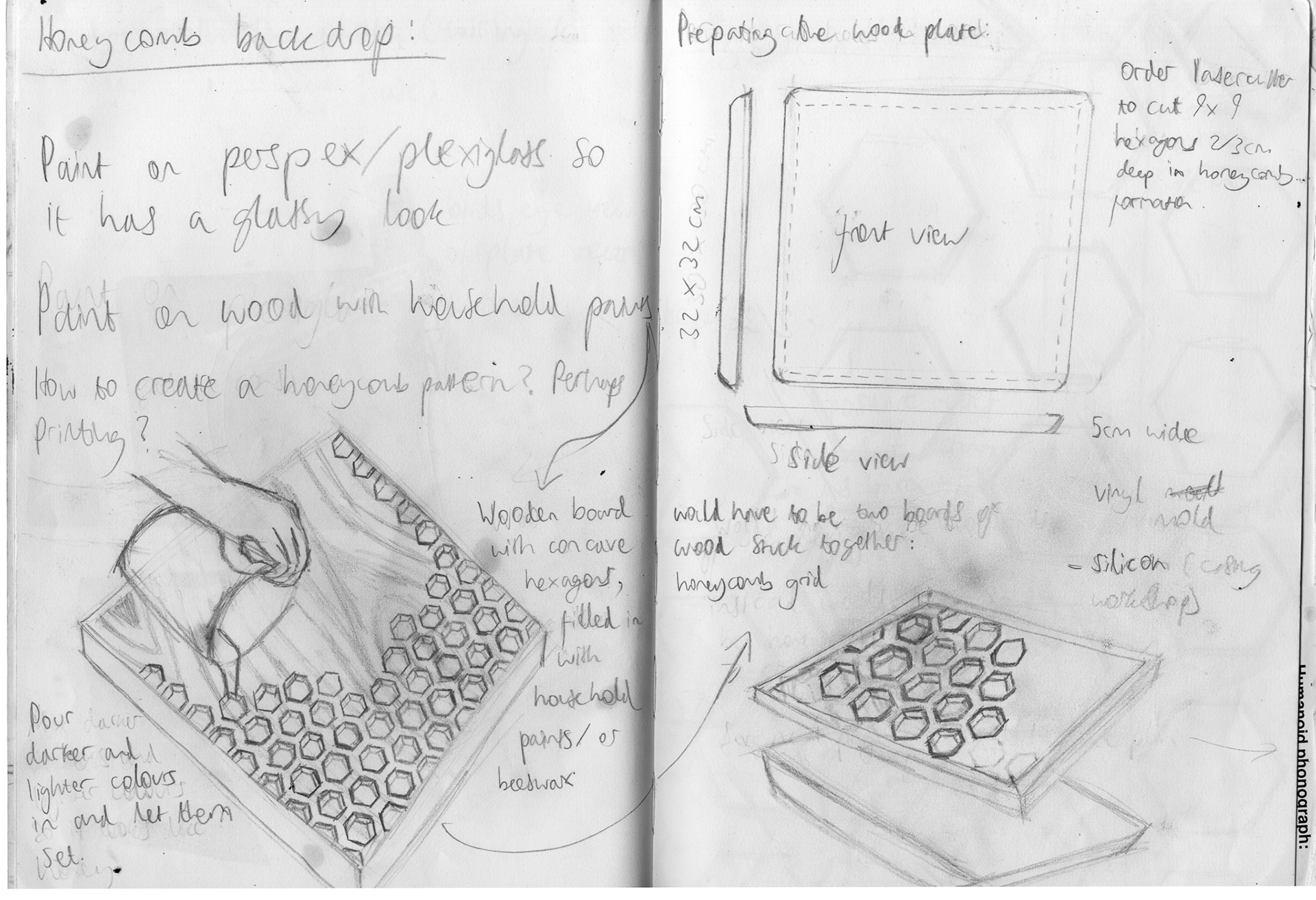 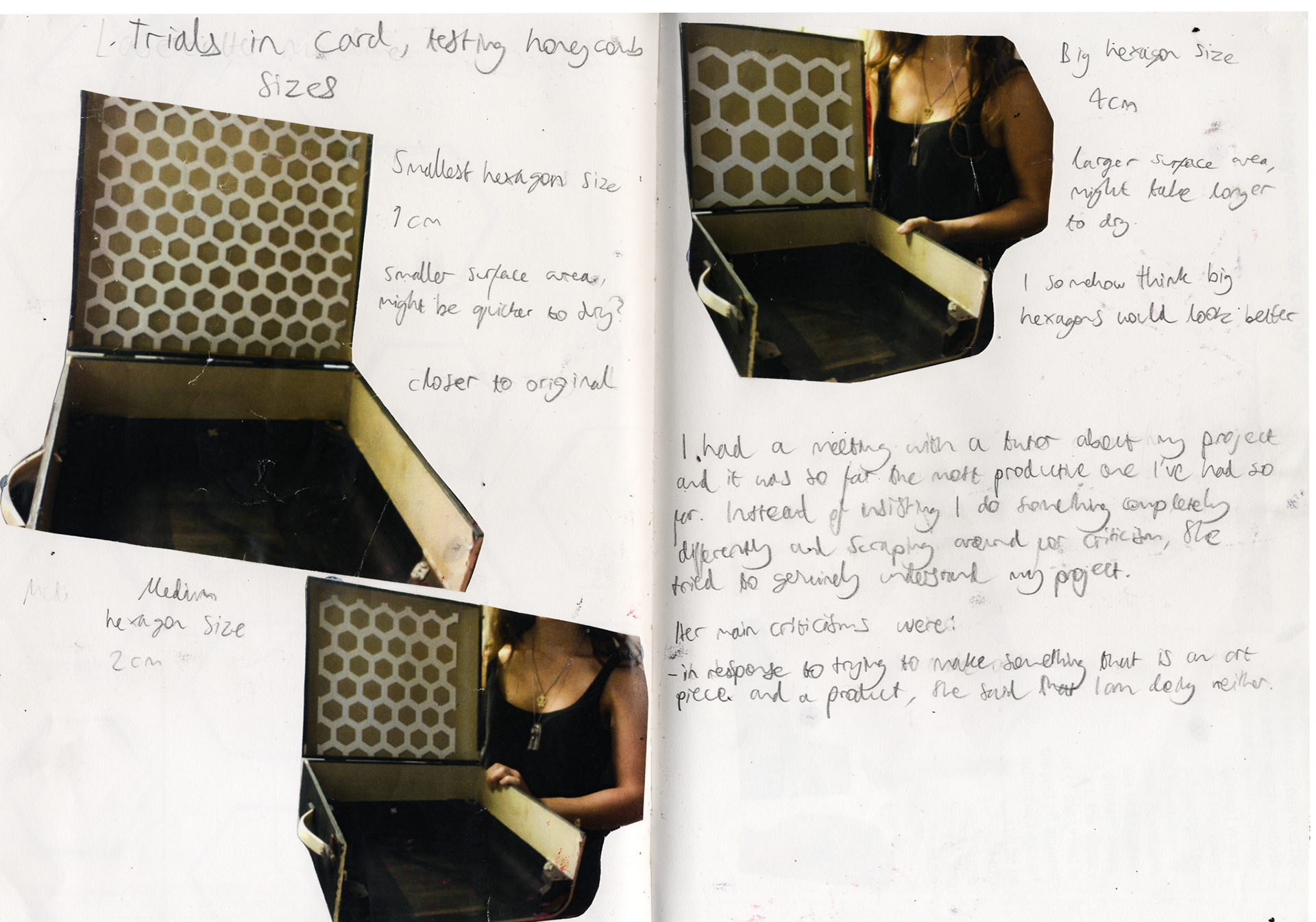 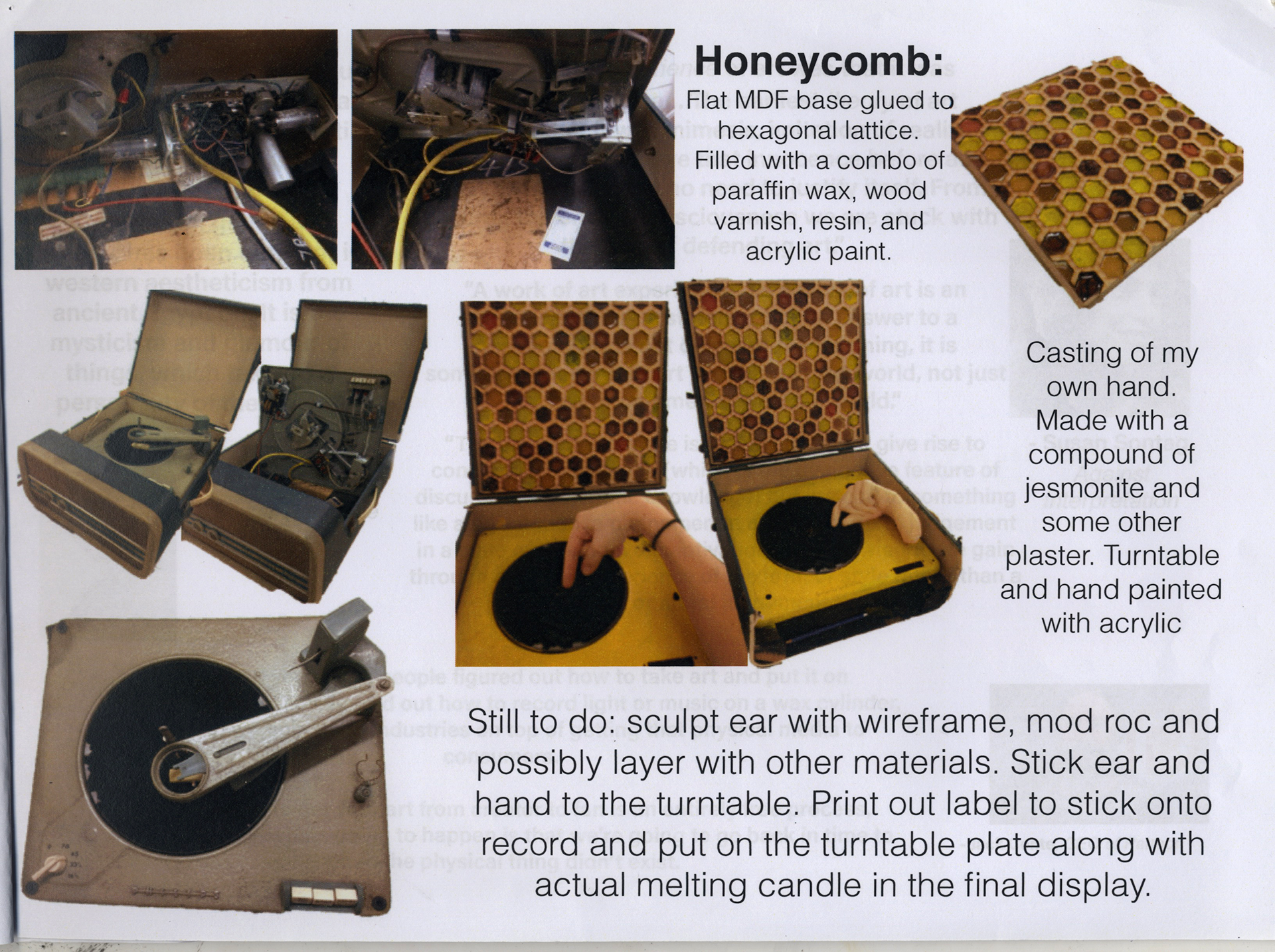 For the construction of the turntable, I bought a second hand turntable from a pawn shop in Leeds and took it apart. I repainted it and made the honeycomb lattice in the woodwork and casting studio.
↑Back to Top